One day, Tsunku, high as he so frequently seems to be decided that the next best thing to tricking hopeful girls into believing they lost their dreams – and then mysteriously flying them in again and saying “Whoops, I actually AM going to give you a chance, Morning Musume. Mwahaaaaaa *drunken laughter*” – was to take a giant group of children, between the ages of five and freaking NINE and tell them they could be idols. He’d do this by making them do auditions on national television and then, IF they passed his random fancy, force them to dance around people like Fujimoto and Goto, who they would be probably and rightfully, terrified of.

And then if that worked out, he’d eventually give them some name he thought up when cornered by cameras and then make them sweat again, by slowly revealing who was in the REAL group and who was still doomed to the mercy of Fujimoto etc. Then he’d make them wait for their first song.

Doesn’t that sound like a psycological paradise for a six year old?
What the crap was he thinking?

From this insanity we get Berryz Koubou and C-ute. 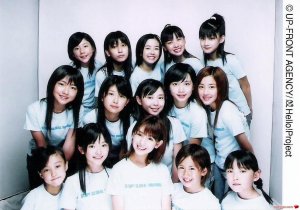 Let’s explore this more, shall we?

The first time I saw the little baby Hello Pro Kids was before there was even an inkling of Berryz. It was on the Hello Morning they dedicated to the terrifying auditions. I mean terrifying as in they’re being asked to sing and dance in front of adult strangers and then taped as if they’re used to being on camera all the time. Also?

I’m sorry, I can deal with 12 year olds, like Tsuji and Niigaki because they had sempais to back them up. People there to take care of them. Putting a bunch of kids together and then proclaiming one of them leader at random?? Why don’t you just throw a sugary snack in front of Koharu??? Same sort of insanity…

With these children, what I saw was terrified little ones who for some reason were on tv, proclaiming their ages and then trailing off because they were too nervous to talk. Also, Morning Musume members were loudly exclaiming about how cute they were and drowning out what little they could say.

Cute, yes.
But I felt sorry for them.

Didn’t Goto and especially Miki just look at Tsunku when he gave them the little-girls-will-inexplicably-frolic-around-you-in-this-pv songs and say, “What the crap is this?”

Didn’t anyone say to anyone else, “What’s going on? They can barely speak yet!”

One girl was so small that she was too scared even to make an expression. She just stared into the bottom of the camera and blinked (barely) with this robotic, yet terrified, expression. I don’t think she even knew where she was.

I couldn’t get over it.

Now somewhere along the line they became real groups and we now have Berryz and C-ute. I’m not even touching on the eggs, because I…just have no idea who they all are and why they are there.

With both these groups I had very few problems initially, simply because I ignored them. When I finally decided to give them a chance (namely Berryz), it was only because Yossy and Rika performed ‘Special Generation’ during a Wonderfulhearts Land concert and the performance absolutely rocked.

Let me tell you…the real version of the song took some getting used to. Everyone in Berryz is below 15 years old, or was I believe, at that time. Even if they were older, they didn’t sound like it.

They can sing about love all they want…but it doesn’t change the fact that they’re children singing about relationships they should know nothing about. All these girls should have been thinking about was bubbles and puppies and lipgloss, or whatever it is little girls think about in Japan…NOT special love for all eternity.

What the hell do they know about that?

They also tend to squeak. When I was teaching myself to sing as a child I didn’t know how to reach high notes yet, so instead of hitting the note I would yell it. There is a difference between singing in a high register and yelling.

In the newest Berryz single, when Risako told us all to raise our hands with her, mirrors broke all over the world.

This is always a problem with Berryz for me. Squeaking about love that you know nothing about just…doesn’t convince me. Convince is the best word I can come up with.

It’d be like Winky trying to convince me to notice her. The more she grins and spastically winks through her peace-sign, the more I want to shove her out of the way so I can see JunJun (who I think is adorable on so many levels). 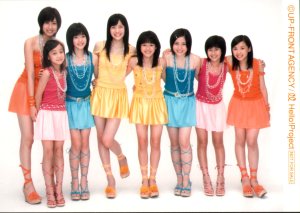 C-ute is the same way. Now some of those girls are really talented vocally. I’d tell you which ones if I knew their names. One is in Buono (which I’ll get to) and the other does the speaking part in ‘Tokaikko Junjou’. One can reach high notes properly and effortlessly and the other has a deeper voice that really resonates.

With the exception of the blue jeans song, a solo about lipstick and the aforementioned Junjou….there’s nothing.

I mean, I’m not interested in any of their other songs at all. Besides, with this new one about tears or whatever it is, they all admitted that they had no idea how to identify with the girl in the song.

Gee, how could that be?

Now I am glad that they are getting recognition. Goodness knows they’ve been through a lot.  I’m sure they’re working as hard as they can to develop personalities and figure out what the hell Tsunku is on (I think Musume has long since accepted that Tsunku is just freakin nuts). I just wish that they would hire girls like the two in C-ute who can actually sing and then write them something they can identify with.

Because they are singing things that are so beyond them, it must be hard for them to get their feelings across. if you have no idea what it feels like to lose love or any of those things, can’t even wrap your head around the concepts, then asking yourself to pretend you do is like pretending you’ve grown when you haven’t. Why shouldn’t these girls sing about middle-school? About being with friends? Clumsily crafting an identity, but still being able to laugh?

Buono is doing a better job in this front. Their first single is about finding one’s identity and not being afraid to show it, right? I love Buono. The only problem is how tiny Momoko looks, despite being 15 now or some such age, and why they gave them Kanashimi Twilight knock-offs for costumes. 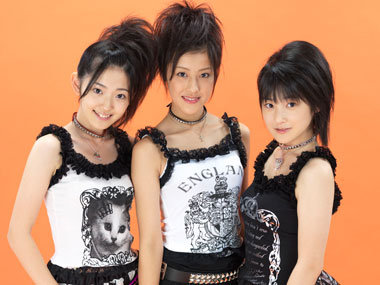 Trying, but not quite Yossy.
Must be that they’re FREAKING CHILDREN!
Who knows, maybe they have touched on these things in B&C. If I could care more about them, I’d know that.  When they perform I just can’t watch it for too long. It’s not bad….not really. It’s just not interesting. I’m not invested in these girls. It’s like they aren’t sharing anything with the audience. As much as some of their songs may be nice, I won’t be going out and buying their albums or concert dvds. It’s not because they suck or don’t work hard.

I think it’s because they’re too scared to admit that they have no idea what they are doing.

Now that they are stuck as idols, they have to pretend they know exactly what personality they are and force themselves to talk when they don’t know what to say. It’s the same as back when they first had a camera and mic shoved at them, when some scary blonde man was telling them to speak up, because they were idols now. I think those frightened girls are still in there somewhere.

How can they make their feelings clear when they don’t know what they are?

Think about ‘Furusato’. That is Abe’s song. We know it, because we could feel it when we heard her sing it. Every performance she was giving something to the audience. She knew exactly who that girl was and what she was feeling. Look at Yuuko, who cried during the PV shoot for ‘Akai Nikkichou’ because she couldn’t get over the lyrics.

Whats my conclusion here? I think it was completely insane to do this to children. Yes, it’s giving them an opportunity. Yes, some girls or maybe all have gotten their dreams. Blah. blah work-hard, blah – supercutedroolsqueak-blah blah…

But even if they’ve been at this for years now, it feels like those girls haven’t moved forward. Not to me, anyway.

I’m not going to say something like, “they need to prove themselves to ME because I am the QUEEN of the world” and so on. But I do think something is missing.

It’s too bad that Tsunku (my favourite scapegoat) is in charge and they can’t tell him to put the crack away and think about how old they really are.

Tsunku, what the crap were you thinking?

View all posts by isilwentari